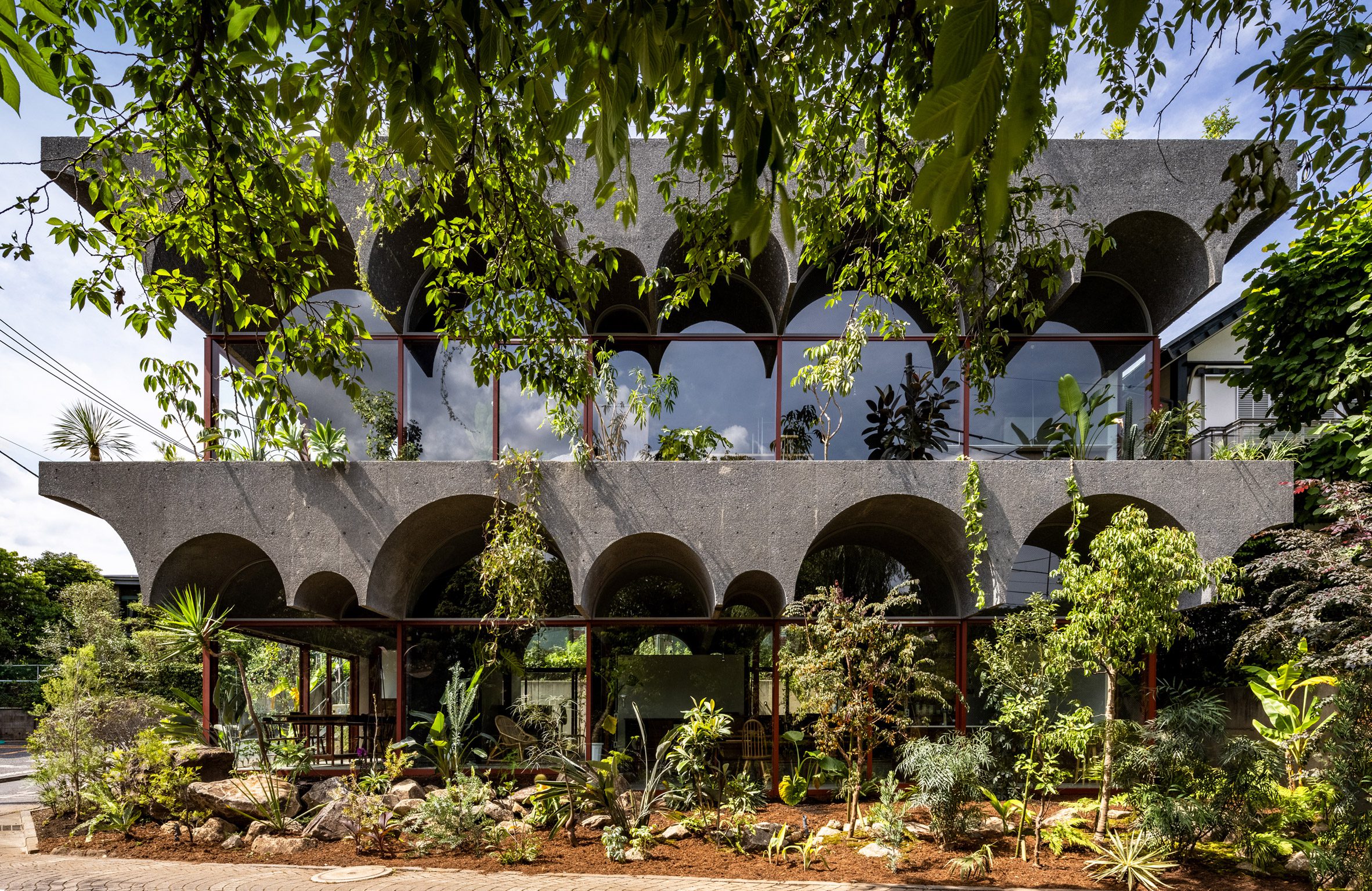 Kiyoaki Takeda Architects' Tsuruoka House was designed to include many plants
Takeda wanted to develop an architectural response to this alarming statistic and chose to design a house incorporating gardens across multiple layers that could support both plants and wildlife.
"Tsuruoka House is an architecture that attempts to hold not only people but also other life forms," Takeda explained.
"By opening the garden to other available life forms, providing them with a place to inhabit, and co-creating the community, the 'garden' becomes an 'environment'." 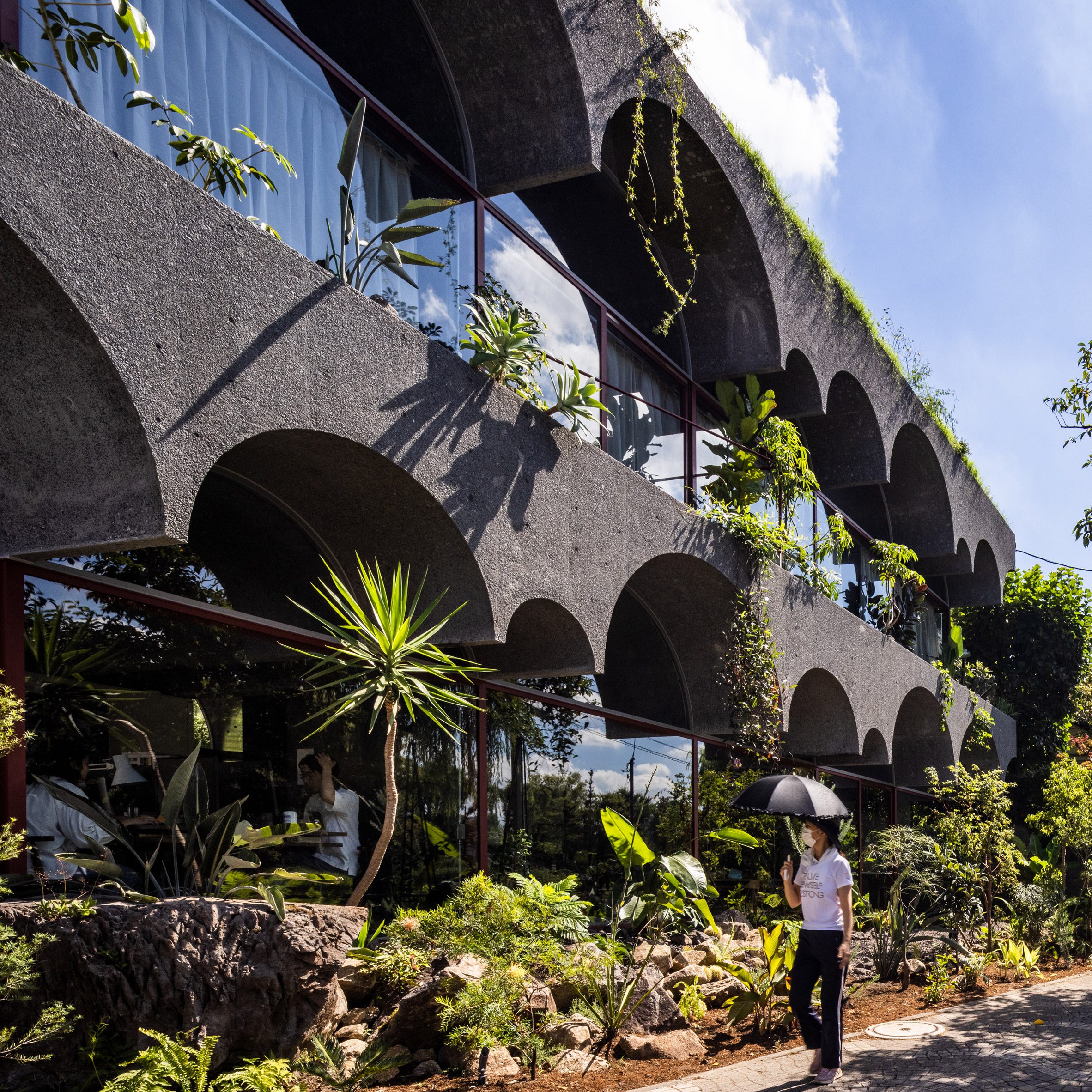 The house's vaulted-floor slabs contain soil for planting
Rather than merely creating a garden that surrounds the base of the building, Takeda chose to stack the gardens vertically to increase the amount of space available for plants.
Unlike typical green roofs, which feature a thin layer of soil suitable only for growing grasses, sedum or mosses, Tsuruoka House's vaulted slabs are filled with soil that can support plants and trees with deeper roots. 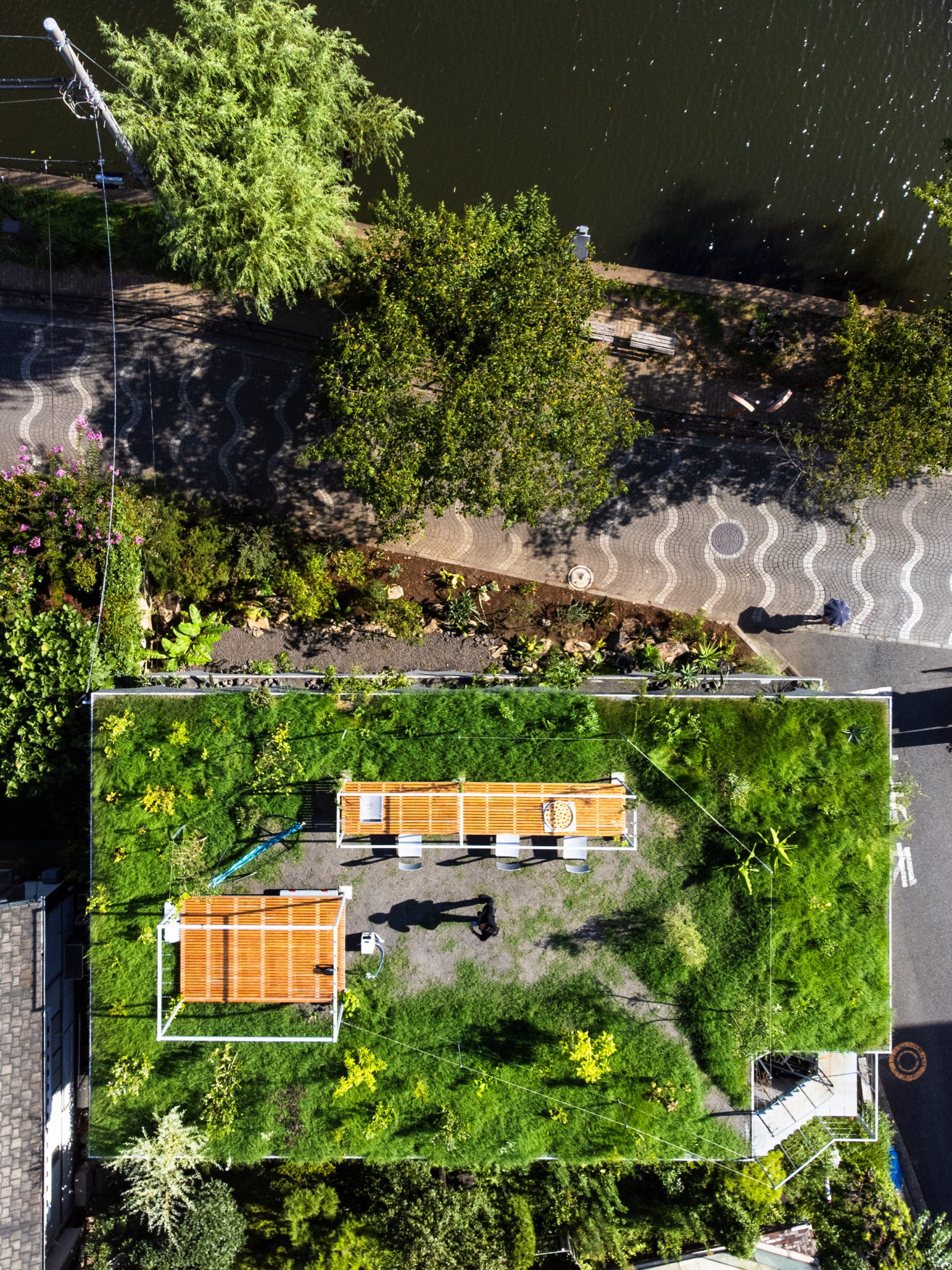 The roof has deep soil for larger plants
"The thickness of the soil was plotted as deep as possible so that the layered garden would be a small forest hosting a mixture of ground cover plants, shrubs and small trees," the architect added.
"This approach goes against modern rooftop greening, which pursues thinner soil." 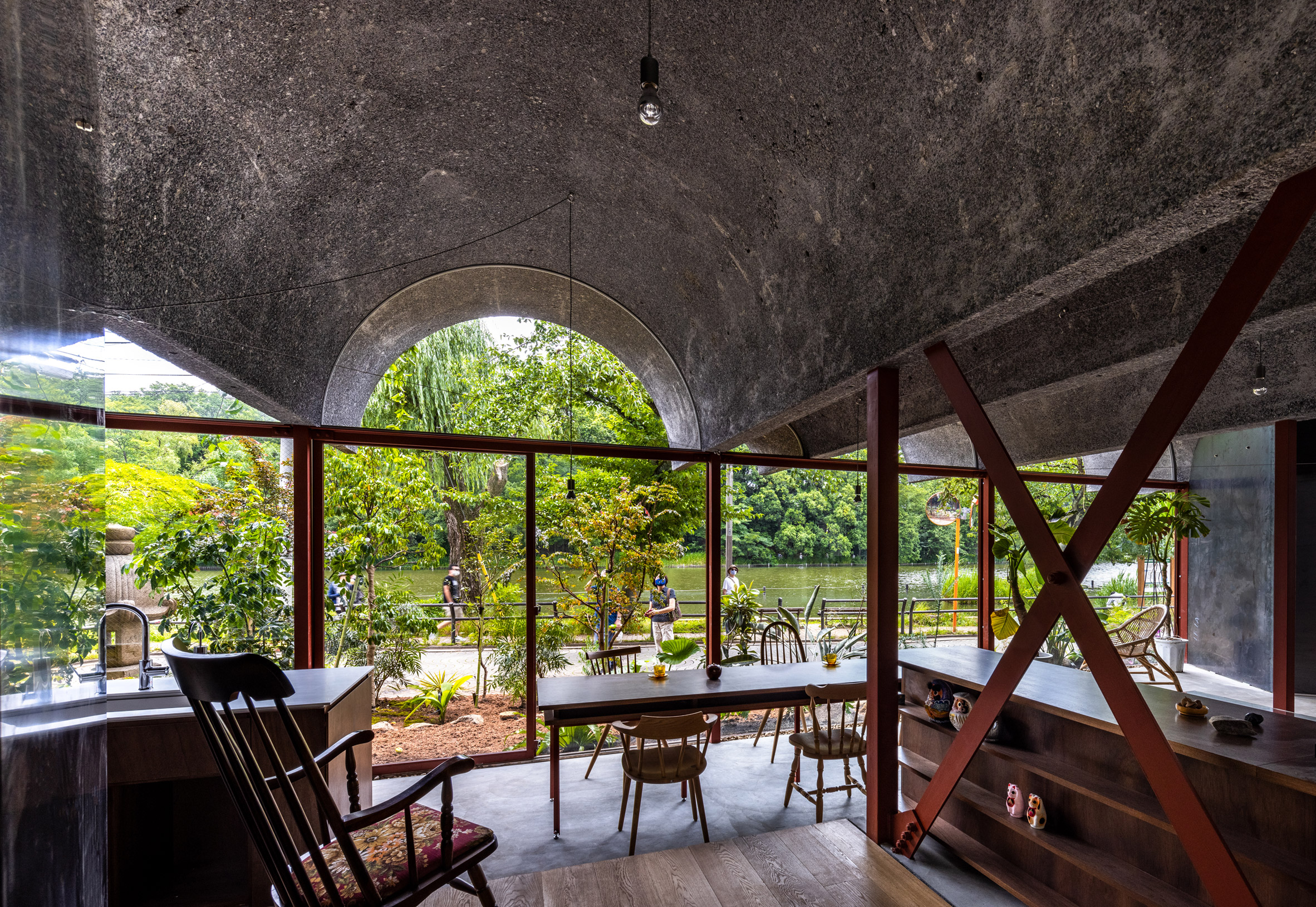 Rooms inside the house have vaulted ceilings
The slabs for the building's first floor and roof feature vaulted profiles that contain soil within their hollow cores.
The shape of the vaults allows rainwater to permeate naturally to the lower sections where it then drains away through channels integrated into the main structure. 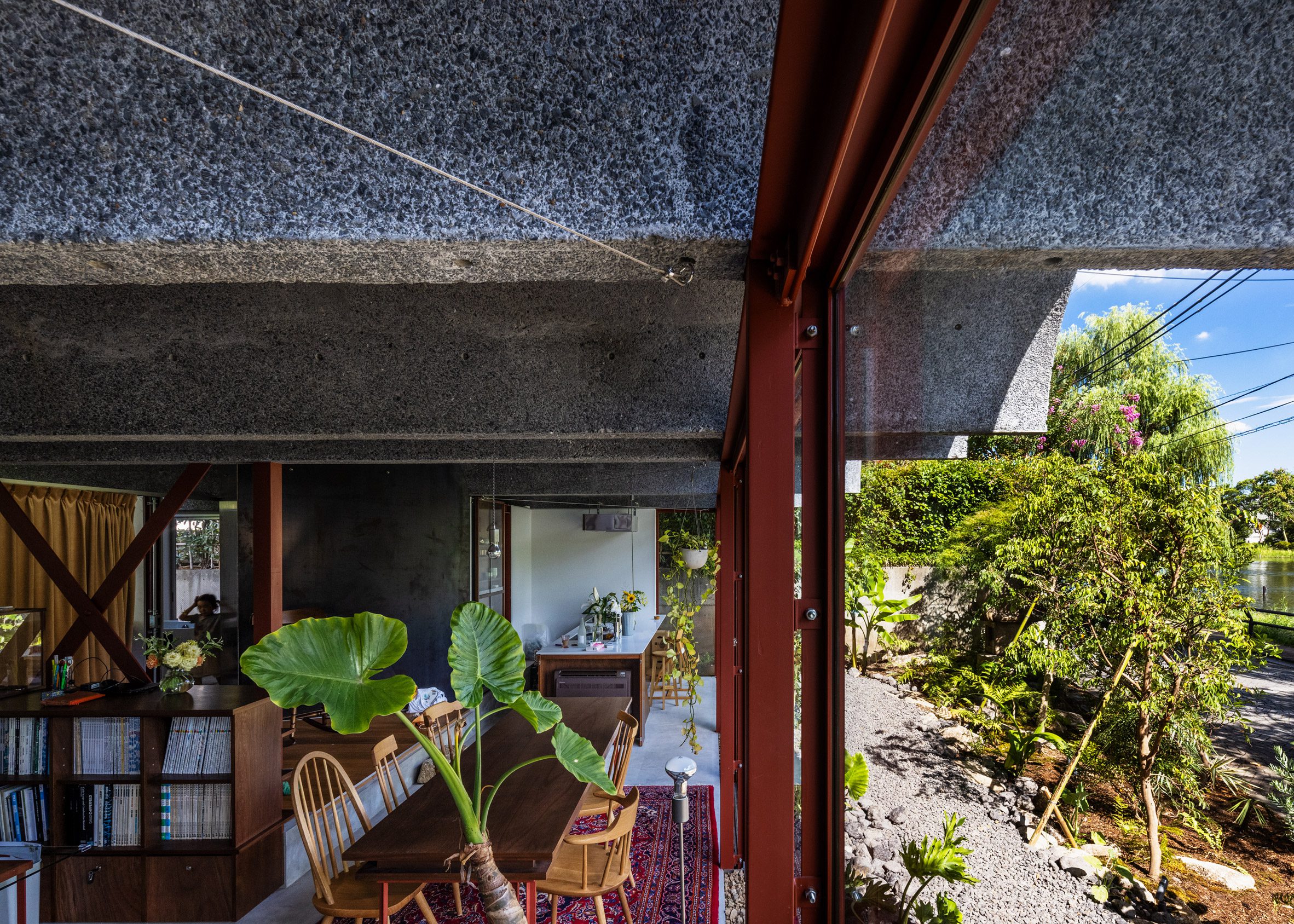 Concrete and steel are visible throughout the home
A robust construction was required to manage the weight of the compost, the growing plants and the rain that can soak the soil and increase its density.
The architects responded to the challenges by incorporating overflow pipes that come into effect during heavy rain. The soil is also layered so the dense upper layer retains most of the moisture needed by the plants, while the more permeable lower level facilitates drainage. 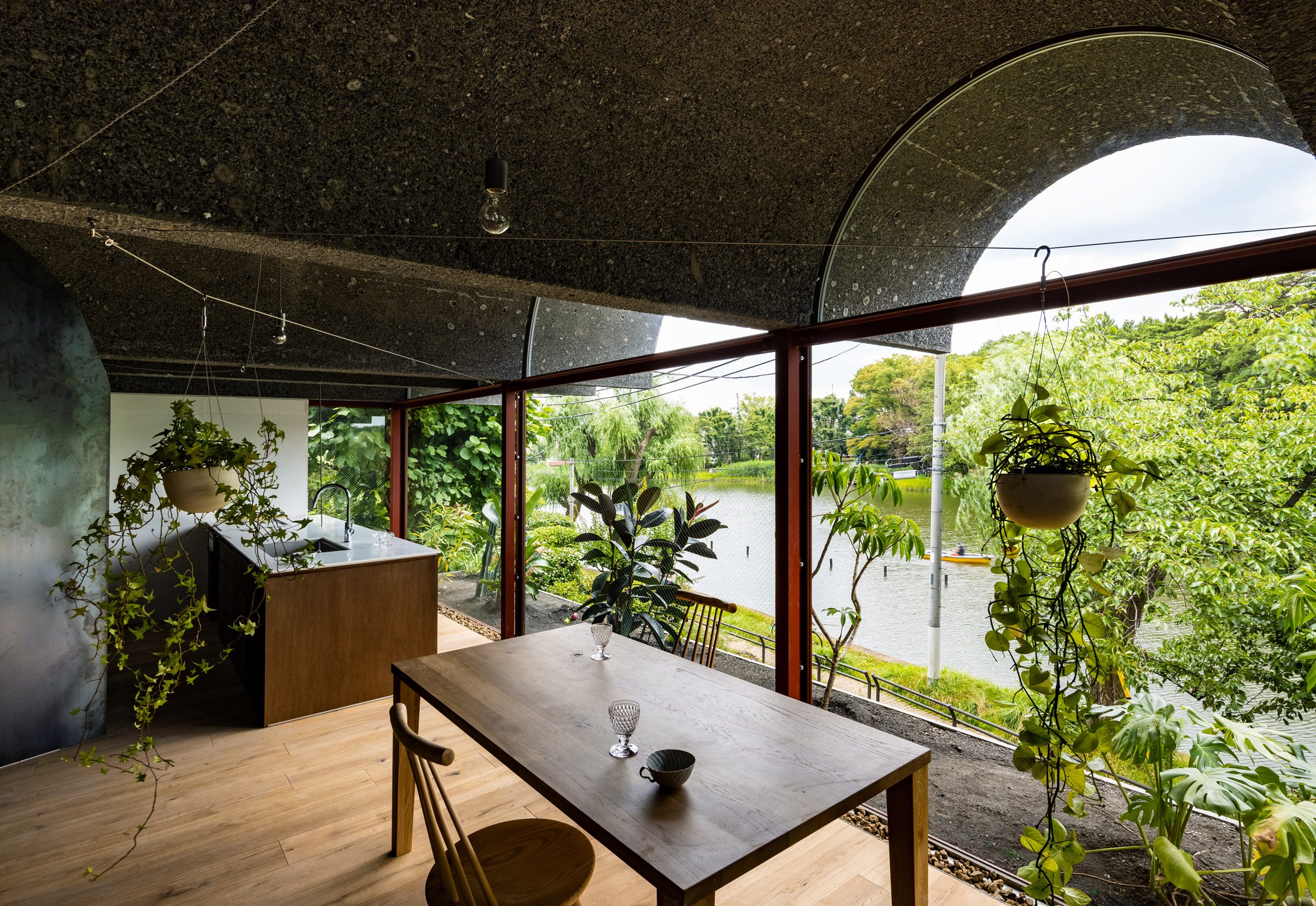 The living spaces have large windows that overlook a river
The thick layer of soil provides other benefits, including protection from the heat in summer and the ability to store and gradually release heat from the underfloor heating in winter.
Inside the living areas, the irregular form of the vaulted ceilings adds visual interest to the spaces as it changes from a maximum height of 3.5 metres to just two metres in some places.
At its lowest points, the ceiling can be touched by reaching up.
In these places, the architect incorporated bolts and other fixings for suspending hammocks, pendant lights or planters. 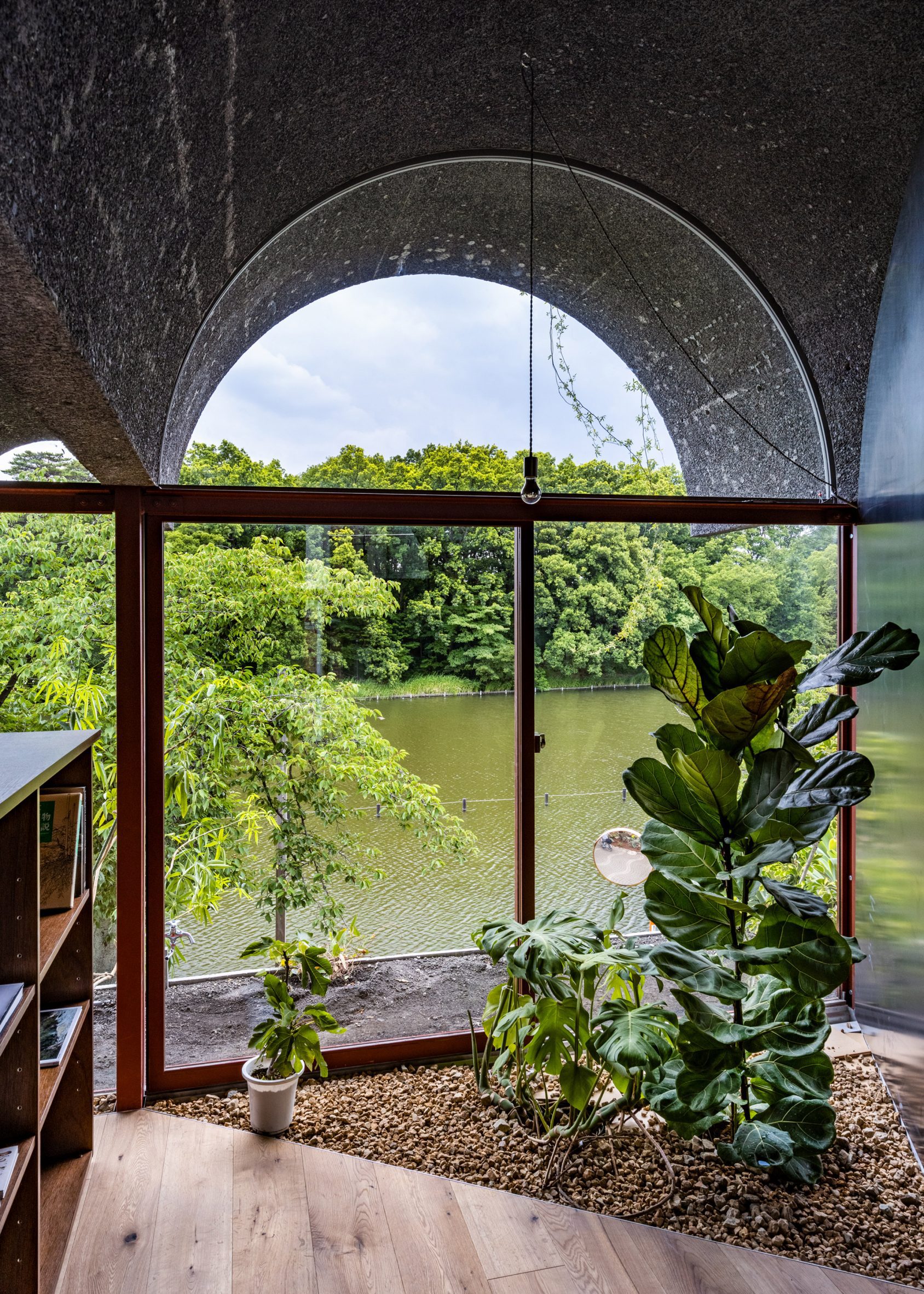 Angular planters are integrated into the floors
While the majority of the vegetation is located on the roof and in planted areas encircling the first and ground floors, there are also angular planters integrated into the floors of living spaces on both levels.
The large roof garden contains a pergola and an open-air kitchen overlooking the adjacent river and surrounding neighbourhood. 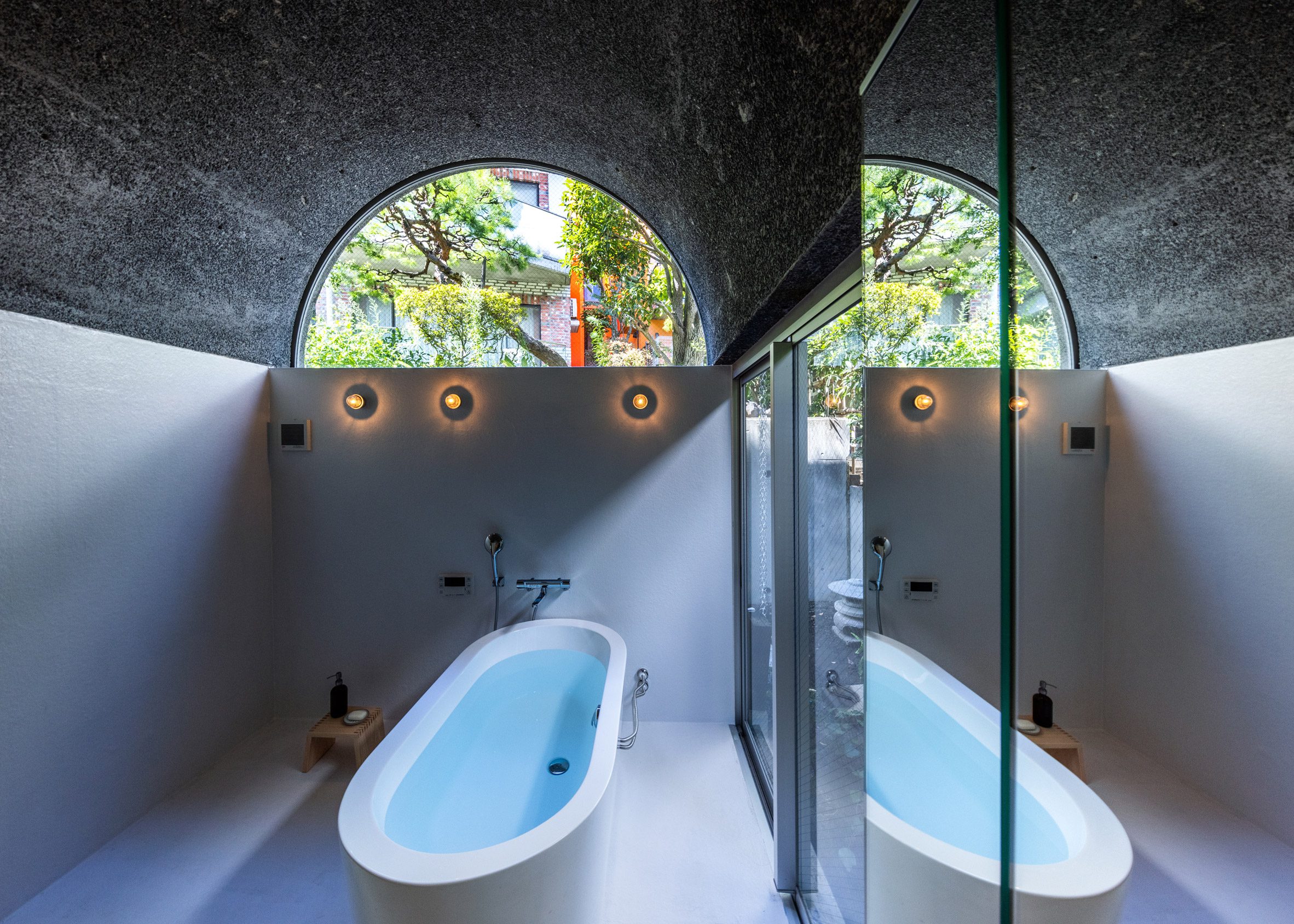 The bathroom occupies another vaulted space
Once matured, the plants will envelop the house and shield the interiors from view, forming a green barrier that will also help to regulate the internal temperature and improve air quality around the building.
"Over time, the plants will grow and birds and insects will introduce unplanned species," Takeda claimed.
"Eventually, a small forest could appear. Then, after decades, existing life forms will grow and hide the building entirely, and ultimately their bio-mass must surpass the mass of the human-made architecture."