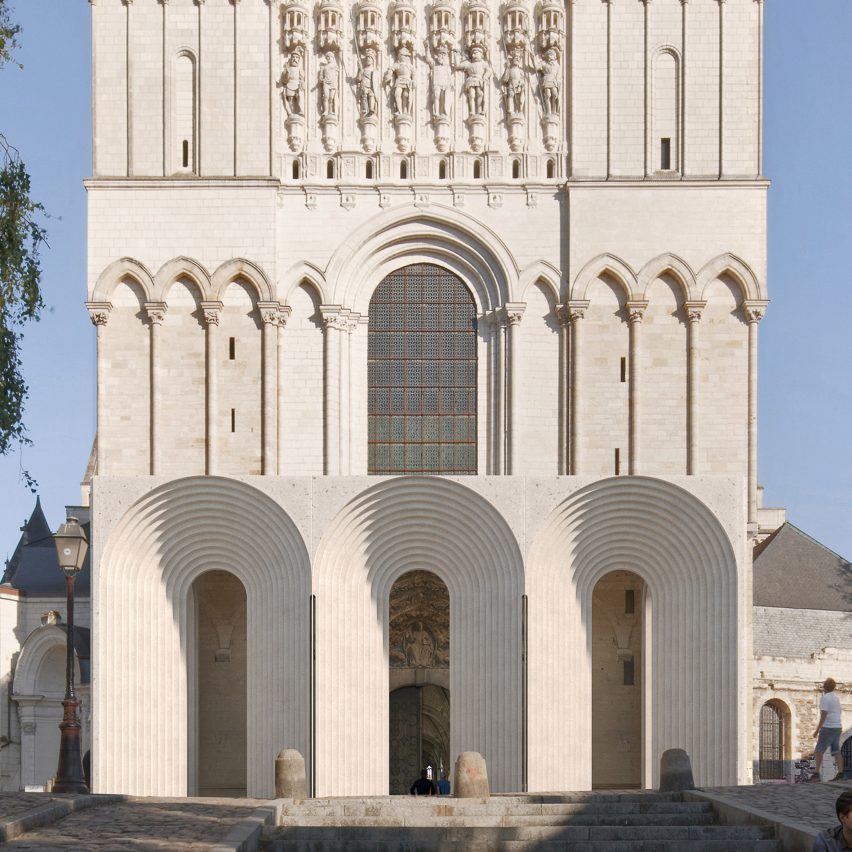 Japanese studio Kengo Kuma and Associates has unveiled plans for a contemporary entrance gallery to protect the sculptural doorway at Angers Cathedral, France.

The studio's addition to the cathedral will consist of a rectangular stone extension with five archivolts, creating an open gallery through which the multicoloured doorway sculptures will be partially visible.

Angers Cathedral was built in the Angevin gothic style in the 12th to 13th centuries on the base of an earlier Romanesque cathedral.

Kengo Kuma and Associates (KKAA) aimed to create "a harmonious dialogue" between the contemporary design and this Middle Age architectural heritage.

"We wanted to put ourselves in the shoes of the builders of the Middle Ages and to create a regulatory framework, using compasses, thus generating the proportions which lead to unity," the studio said.

"All this is achieved using the finest stone processes possible which then frees itself from the thick walls of the cathedral built in stereotomy," it added.

"It is this technical process that creates a contemporary feeling to the building, while remaining part of the history of architecture."

The carved medieval portal at the cathedral in Angers, northwest France, dates back to the 12th century and features multicoloured stone relics from the Middle Ages.

These were discovered when the portal was cleaned in 2009, after which it was studied and restored. 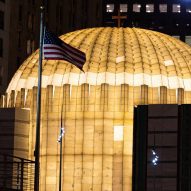 Am entrance canopy built in the first third of the 13th century originally protected the sculptures, but this was demolished in 1807 and was found to be too difficult to recreate.

"After several historical and archaeological studies, the data collected were not considered sufficient to consider an identical reconstruction of the old gallery," the French ministry of culture said.

Instead, five studios were invited to create a new design for the gallery, with Kengo Kuma's studio beating Rudy Ricciotti, Philippe Prost, Pierre-Louis Faloci and Bernard Desmoulin to win the commission.

"The contemporary construction he imagined perfectly meets the expectations of the competition: it fits harmoniously into a major heritage building and more broadly into its urban context, while protecting the portal of the cathedral and its old polychromies," the ministry added.

Work on the project is ongoing and it is projected to be completed in 2022.

Kuma is known for his work with natural materials, including the new Japan National Stadium which was designed for the Tokyo 2020 Olympics and clad in cedar panels.