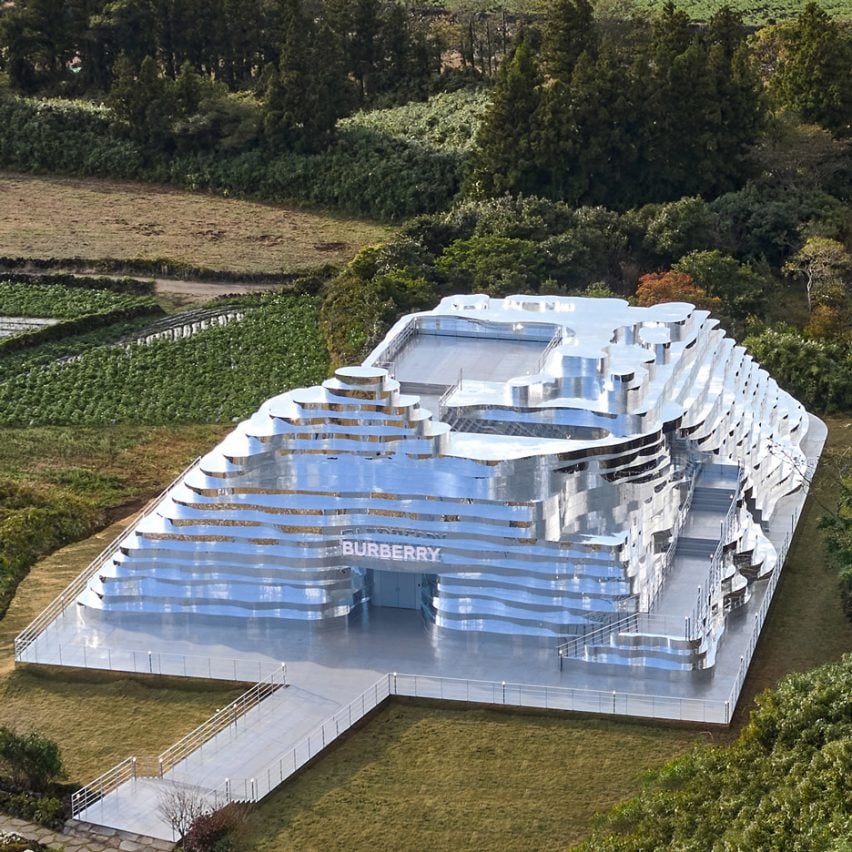 Nestled at the foot of the Halla mountains on Jeju Island, The Imagined Landscapes Jeju is part of a series of Burberry outerwear pop-ups around the globe.

Made from plywood, timber and a reflective polycarbonate mirror material, the design is intended to marry nature with modernity and with the brand's contemporary identity.

The structure's undulating facade reflects the sky above and the nearby rolling hills, and also resembles the contour lines drawn to indicate elevation on topographic maps.

"Its shape and reflective surfaces seamlessly merge with the beautiful natural surroundings, sitting at the foot of the majestic Halla mountain," the brand told Dezeen.

"Mountainous terrain is reinterpreted with modernity, as this imaginative structure is sculpted by architectural contour lines inspired by maps."

Once inside, customers step into a room that displays the brand's outerwear campaign and features an introduction to the work of three digital artists: Maotik, Cao Yuxi and Lia Jiayu. 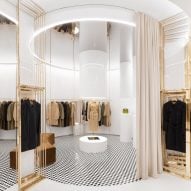 In the final room, visitors are surrounded by screens showing interactive films about the outdoors by the three artists. Maotik's film Infinite Landscapes tracks the audience's movements, using their behaviour to inform the computer-generated landscapes projected onto the screen.

Shoppers can also walk up to a viewing deck at the top of The Imagined Landscapes building via an external staircase that cuts through the structure.

The viewing platform offers panoramic views over the Sanbang Mountain, which is also located on the island, and of the surrounding seas.

A separate, smaller building a short walk from the mirrored structure houses a cafe where guests can indulge in local pastries.

Here, the interior is coloured in the same beige tones synonymous with the Burberry brand, including on a fabric with a deer print. Customers sit on chairs and tables covered in the same mirrored material found on the building's exterior.

Burberry has several other stores that allow customers to experience its products in unusual ways. Its Shenzhen flagship store lets customers use Tencent's WeChat app to interact with the window display and play their own music in the fitting rooms.

In one of its central London stores, a robot by artist Graham Hudson appeared to mill three-dimensional sculptures from inside a scaffolding structure.

The Imagined Landscapes Jeju is open until 12 December 2021.

The photographs are courtesy of Burberry.